Samantha is a graduate of Radford University (B.S. English; Technical Editing and Writing) and The George Washington University (M.P.S. Publishing; Editorial/Marketing and Promotion). Her first play, Demolition Lovers, was written her sophomore year of high school and won the 2010 New Voices playwriting contest. Sadly, due to a conflicting trip to Europe, it would be another two years before she would see that play performed. She has been writing ever since. Her plays have appeared in Junto Magazine and in 5th Wall Production‘s Rough Draft Reading series. When not working on new plays, Sam is half the team behind the Real Horrorshow Podcast and one of the founding members of Postcard Press.

Stormy is the co-host of Real 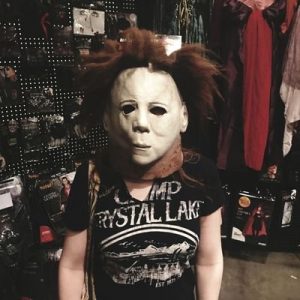 Horrorshow as well as a writer of movie reviews and essays for the website. Speaking of writing, she keeps busy as a writer of poetry and dark fiction, while also contributing her time as one of the three co-founders of Postcard Press. She earned her Master’s degree from The George Washington University, and her Bachelor’s from The Pennsylvania State University. When she isn’t writing, podcasting, or watching horror movies, Stormy enjoys reading, hiking, and practicing yoga.