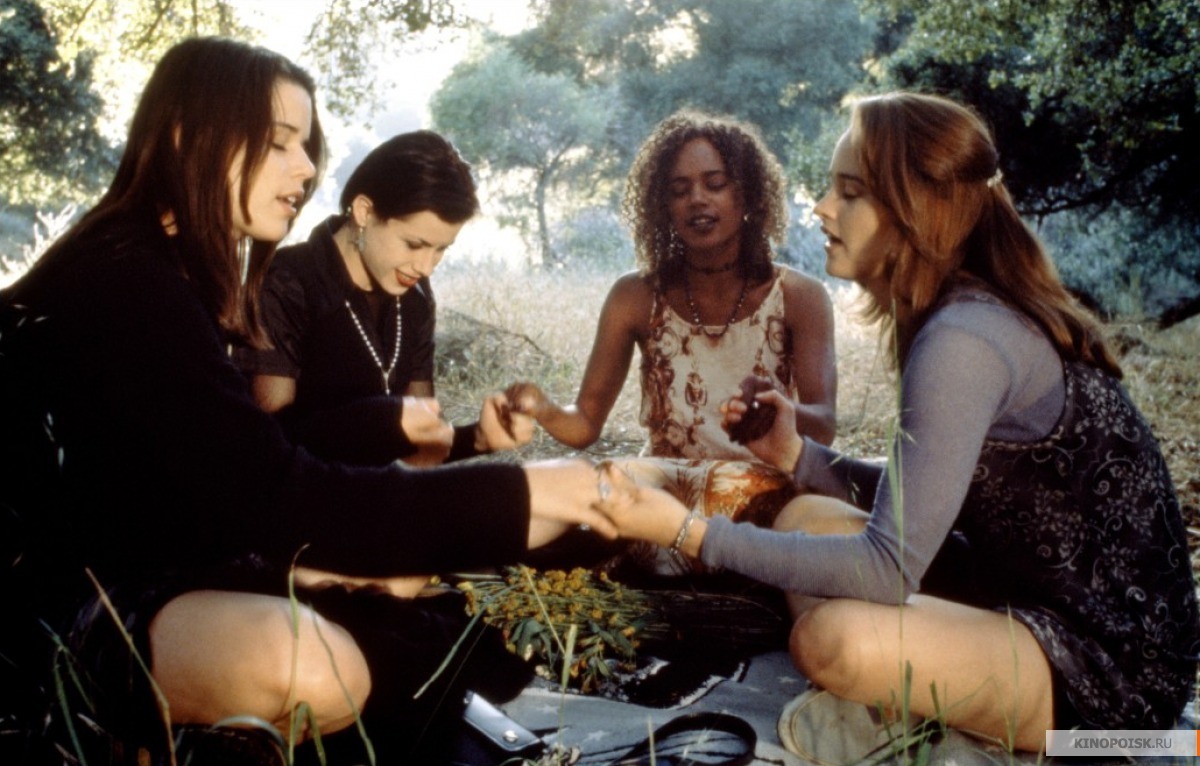 The 1990s were a great time in teen cinema. Teen rom-coms like 10 Things I Hate About You, She’s All That, and Clueless are movies we still cherish. But, another trend that started to emerge at this time were movies and TV shows that showcased the supernatural teen. We can blame Twilight all we want for this, but the trend started long ago with Clarissa the Teenage Witch. The Craft is just one of many witchcraft inspired movies to come out in this decade, and it’s one that a lotof people (creepy girls and beyond) really love.

While I do remember watching The Craft as a kid, I don’t have the nostalgic connection a lot of other girls my age have to the movie. In fact, I always get it mixed up with Little Witches, another movie about teenage witches (but that one has tiddies in it).  In fact–before re-watching it for this review–the only thing I ever remember about The Craft is when the good witch balances a pencil on its point. And someone gets smashed with a bookcase, right?

Long introduction is long, so let’s just get into the nitty-gritty of the whole thing.

As I said in the introduction, I always get this movie mixed up with Little Witches. I mean, who wouldn’t? Both stories are about a group of outcasts who happen to be witches, make a deal with the devil, and learn a hard lesson about letting all that power go to their heads. They both happen to take place in Catholic schools, so not only are the girls hot but they’re also in little school girl uniforms. Naughty.

The Craft starts as your typical teen movie. A new girl moves to town and finds out that she has witchy powers (so, it’s also like the pilot episode of Sabrina the Teenage Witch). She gets involved with a ragtag bunch of outcasts because they share a similar interest–witchcraft.

Middle middle middle. They low key make a deal with the devil (though it’s never directly stated)  but as it turns out, making a deal with the devil isn’t what it’s cracked up to be, and Main Girl doesn’t want to be their friend anymore after they kill Billy Loomis. And at some point Fairuza Balk hooks up with Adam Sandler after he wins the big football game.

They get mad and try to kill her. All in all, I wouldn’t say the story is really that remarkable. It’s your everyday teen drama with some witchcraft to make it unique, but Little Witches and Sabrina the Teenage Witch came out in the same year… So, was it really that unique?

I like the characters in this movie, aside from the main character, Sarah (Robin Tunney), they all have very distinct personalities and problems they want to fix with magic. Bonnie (Neve Campbell) wants to heal her scars, Rochelle (Rachel True) wants to get revenge against her racist bully, and Nancy (Fairuza Balk) just wants to be more than white trash (but she’s white… so…). So, I really like the development of these characters and how they change as they get what they want.

Now, the reason I say Sarah doesn’t have a distinct personality is because… Well, she doesn’t. I would say Sarah’s character suffers from Meg Ryan Syndrome. Meaning, she’s meant to be relatable for the audience, so she can’t really have any bold personality traits. Really, the only way she stands out is because it’s revealed she tried to kill herself. However, this detail is used to pull her deeper into the witch clique and later used against her when they try to kill her for betraying them. Meg Ryan Syndrome doesn’t make a bad character because that brand of character is meant to be an avatar for the viewer to project themselves onto (See also: every clumsy brunette in every YA novel). She is us. Sarah is a new girl thrown into this new world, just like the people watching the movie.

And the only acting I don’t care for comes from Billy Loomis. In fact, I hate him so much in this movie that if you told me that Billy Loomis would go on to play Billy Loomis in Scream that same year (why did everything come out in ’96?) I would have “pfft”‘d at you.

Neve is wonderful as always and Maureen McCormick 2.0 (aka Ben Stiller’s wife) is always a delight on screen. Even when she’s playing a racist ball of bitch. I just adore her. I want her to come back.

The production of The Craft is pretty on par with other teen movies that came out around the same time. It’s a well produced film so there isn’t a lot of negative things to say. 1996 was still early for CGI so a lot of the effects were practical–not special.

There was clearly a lot of wire work put into this movie and what little CGI is used isn’t that distracting. I don’t think this movie would be

remembered as fondly if it was bogged down with so much crappy 90s CGI that you’d start wondering when Kevin Sorbo would show up to save the day. Mmm… Mid 90s Kevin Sorbo.

In fact, the practical effects are what I like most about this movie. It’s probably weird to say about a movie that came out when I was three, but The Craft is super refreshing to watch. If (and when, I guess) this movie came out now, it would be so over run by CGI, you’d wonder why they didn’t just make it an animated movie.

No. I don’t care how many crystals you charge in the sunlight or how much black clothing you own: witchcraft isn’t real.

If you want to fight about this, we can fight. There’s a baseball diamond where I coach Little League about a mile from here. We meet there around two-thirty in the morning dressed all in black. Your hair in a black stocking. And we have us a knife fight. We won’t be bothered.

What is real about this movie is the same thing that’s real in a lot of teen dramas both past and present: those who don’t meet the status quo get bullied, and sometimes the outsiders snap. Like, it’s just amazing how it’s 2017 and we’re still producing movies and TV shows with this concept because of how relevant it still is. You would think we’d have learned something after the original Carrie. However, I do like that the bullied do become the bullies because that is also a reality… That is very relevant today. I’m looking at you Tumblr.

But no, it’s still a reality for many high schoolers and 13 Reasons Why becomes one of Netflix’s most popular shows.

For me, this movie gets an “eh” #sorrynotsorry. I get why people love it BUT at the end of the day it’s really not that unique and would have been forgotten if not for the great performances from the Core Four.

I have just been informed that Adam Sandler was not in this movie, and that I’m thinking of Waterboy. My apologies.

One thought on “Written Review: The Craft”