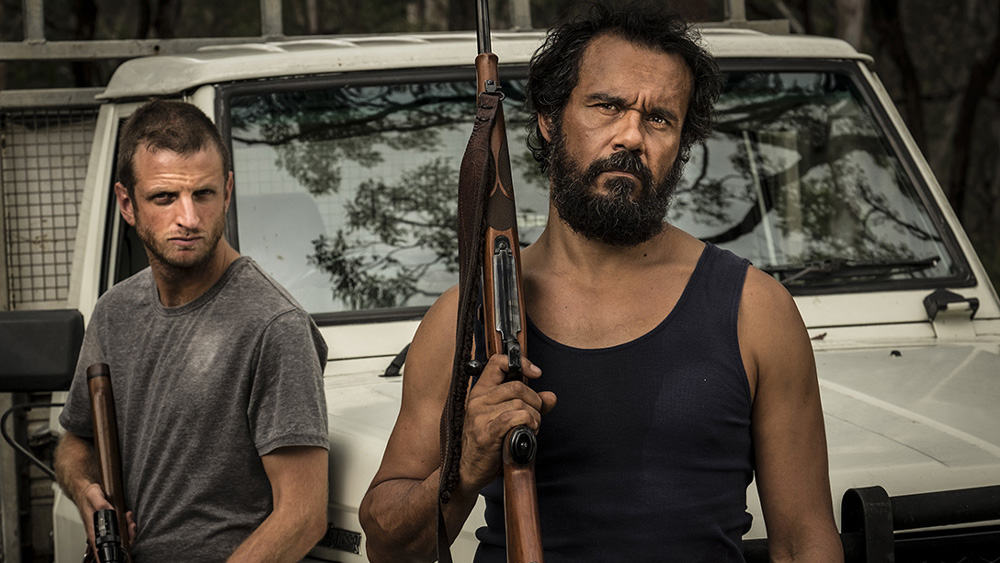 Somewhere on the internet, I read that this was one of those hidden gems on Netflix, ya know, the best survival movie streaming right now. And I bought it – I mean, wouldn’t you? It has such a cool and chilling name, and it’s Australian, so what’s not to love? Turns out, this film is a little too good to be true. The plot goes nowhere, and it’s written with tons of creepy details that all lead to nothing and make little to no sense. Also, talk about loophole city, but we’ll get into this shit later. This film is about a young couple that go to camp out on a beautiful lake for New Years (because of course it’s warm AF where they are so yeah) and they come across another empty tent on the beach. After the tenants don’t return, they become anxious and want to call a park ranger for help, but instead, two men arrive, we learn that they killed the family, and just spend their time hunting people who like to go to the lake. We never know why, they just DO things.

So, the story is decent. A generic scary plot, but the story wants to be clever by having flashbacks and preventing a linear storyline. It’s confusing at first, but then becomes obvious that it swings from the present with the young couple, to a week before with the family in the empty tent on the beach. Like I said before, it’s a pretty solid concept. You’re out, semi-alone in a national forest or something that is manned by park rangers for the holidays, nice and semi-secluded in the woods, and a mile up the trail just happens to be the killing ground of two strangers. However, let me point out some BLARING fucking issues with this otherwise decent horror film. SPOILERS AHEAD.

These two men live together, I’m guessing they are roommates, but how do they know each other? They are from completely different walks of life, but the only thing in common is they like to kill together. So, what’s the story? Fast forward to when they kill the family on the beach. They kill them a few days after Christmas (a week or so before the young couple arrives, so there isn’t much space in between these events, remember this detail) and it seems as though “German” the big dude, is trying to teach the other scrawny guy to kill, because it’s his first time. There’s a scene of them at a bar for New Year’s Eve and they are discussing how they are never going to do that again because “German” went to jail for having sex with a minor (but why isn’t he still in jail tho?) and the audience is like, okay they probably do this shit on the reg. No. You guys, they do this shit ONE TIME TOGETHER. So…what the fuck man?

Look at these fucking clowns. Stemming from what I just discussed, these guys tote around sniper rifles for some reason. Now, I know that’s great and all, but when they tie up their victims and shoot them from 3 feet away, I feel like that’s kind of a cop-out. I mean, where’s the challenge if the target isn’t even moving. German, the one who owns the guns, can’t even fucking shoot a can off a guys head, he sucks so why does he even own guns. SMH. As you watch it, you start to get the feel that all kinds of cool, badass stuff was shoved in here and it just didn’t fit.

Once the violence picks up and we start to piece together what happened to the family on the beach it gets pretty nuts. It’s very brutal too, but there’s not enough screen time for the family so when they died I didn’t even really care and didn’t understand the point of it all. Sometimes senseless killing in films is good, but sometimes it’s a fucking train-wreck. When I say violence, it does get pretty violent: there is implied rape, killing at point-blank range and…

TRIGGER WARNING: Baby violence. If you’re not cool with that, just skip this movie all together, you’re not missing much.

One detail I did enjoy that gave me chills was the moment when the teenage girl falls asleep in her families car. (There is a big scene of her having night terrors, and it was one of those things that meant nothing and if it were removed from the film, nothing would change at all.) She wakes up to a creeper standing outside of the window. He gets creepy and she starts telling him to go away and beeping her horn so her hiking parents can hear. He starts “barking” at her and then he pulls out the sniper rifle and tells her to get out of the car. She does and there’s a shot of her wet shorts. Well, if someone pointed a rifle at my face I’d piss myself too.

Finally, there is a baby involved who is simply left for dead in the woods at the end. So…does he die? We’ll never know.

Although the story is a hot mess, the actor’s performances aren’t. The film is a slow burn, and the interactions between the young couple and the villains is suspenseful. Also, the young couple has one of the best on-screen relationships I’ve seen in a film of this genre.

From the get-go, the imagery is stunning. Australia is a beautiful place, guys. The creepy factor is introduced in the very beginning with the empty tent, but is quickly lost when there are a ton of cut scenes to the two guys out at bars doing nothing. Also…if about a dozen scenes were removed from this film, it would probably be smoother without changing the endgame. Great example: the whole end of the movie with one car accident following the other. It seriously could’ve been cut down so people don’t start to zone out.

I guess a sort of half-assed congrats to Damien Power’s directorial debut with this one, because it IS realistic. This world is crazy, anything can happen, and this sort of idea can make people fear enjoying the wilderness, in case of psychos who carry rifles.

One final point I will make, is that I see way too much of a parallel to one of the greatest and most fucked up survival horror films I’ve ever seen: Eden Lake (2008)

If you haven’t seen it, do yourself a favor.

Otherwise, I give this a solid MEH.