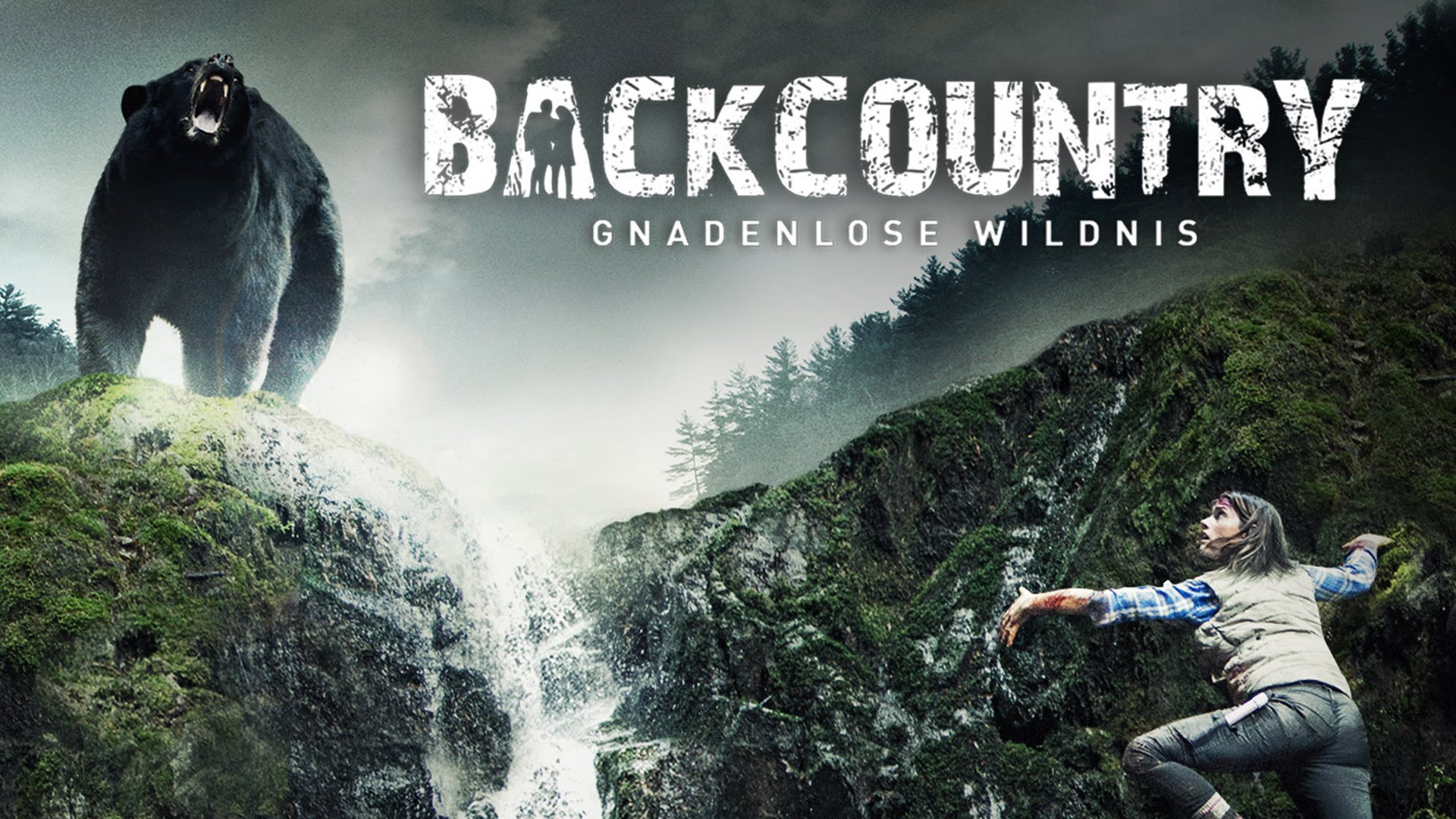 How does one become a reviewer on Rotten Tomatoes? I only ask because this movie, somehow, has a freshness rating of 88 percent from critics.

Back Country is a 2014 Candian horror movie about a couple who go out into the woods for a weekend away from the real world. It’s the full-length directorial debut of Canadian director, Adam MacDonald, who also wrote the film. So, from the creator perspective, MacDonald had a lot riding on this movie and for a first time effort… It’s not terrible.

But it does fail as a horror movie.

Story wise, Backcountry is simple. A couple goes into the woods for a romantic getaway because Generic Male wants to show his Hot Girlfriend some magical lake from his childhood. As you can imagine, shenanigans happen, and they end up lost and chased by an angry black bear.

Compared to other horror movies of the last… 15 years, Back Country does have an original concept. While the idea of basic idiots getting lost in the woods isn’t a new device, they’re usually chased down by Appalachian inbreds (a trope I take a lot of issue with, but I’ll save that for a Wrong Turn) review. This couple ends up stalked by one angry black bear, creating a great plot based around the Man v. Nature arc.

Everyone’s performance was okay. I wouldn’t call Missy Peregym the next Meryl Streep, but her performance wasn’t so bad that it pulled me out of the film. Toward the end, most of her acting was just running, breathing, and screaming… So, it’s pretty hard to mess up.

I mean, she and Jeff Roop were playing a couple on the verge of engagement, so the only requirement was to act like they’re in love.  And their chemistry wasn’t awful.

They were fine. Luckily, this movie didn’t require the characters to be more than people lost in the woods. In the end, the bear was probably the best actor.

When it comes to the characters, there isn’t a lot to say because you don’t know that much about them. We briefly learn their professions and know that they’re in a relationship.

Relationship wise, they’re kind of cute. However, they don’t strike me as a couple on the verge of marriage. There’s an awkwardness to the way they interact, and The Boyfriend gets irrationally jealous of a handsome Irish stranger. I don’t believe you would get suspicious of a stranger if you’re secure enough in your relationship to propose marriage. I wouldn’t know though.

Then again, their relationship crumbles as soon as she realizes they’re lost in the woods… So, maybe they didn’t have a strong relationship after all. It is understandable to be upset and angry about their situation, but you don’t bring up years of repressed feelings when you’re lost in the woods and need to focus on getting out of this situation.

Again, everything was fine. It is Adam MacDonald’s first feature length film, so it has modest production value. And it was shot in 16 days, which is pretty impressive given some of the gore effects. There are weird camera tricks he does when the couple goes skinny diving that seems unnecessary, but that’s not going to make or break the overall effect of the movie.

There’s not much to say here because it is a low budget film.

Backcountry is loosely based on the true story of Jacqueline Perry and Mark Jordan. However, in the true story, the husband survives, and the wife passes away. So, like any tragic event, we have to exploit it for a quick buck.

I mean, it’s totally different because the genders are reversed… Because there’s something more enduring about the woman being psychologically scarred for the rest of her life, I guess?

When the couple first arrives in the woods, the story tries to create a red herring with the handsome Irish stranger. I guess the character’s main purpose is to show Generic Male doesn’t know the trail as he claims; however, they try to set him up as a potential murder at the same time. It just doesn’t work for me because their main threat is supposed to be a bear, so why waste the audience’s time with something that just isn’t going to come to fruition?

We don’t see the bear until almost an hour into the movie. We know he’s lurking out there, but the bear doesn’t come into play until the whole thing is ending. At one point we do see it’s shadow sniffing outside the tent, but it’s not scary. In fact, when this part happened during my second viewing my boyfriend said:

“It’s cute, like a child poking its head through a tent wall.”

The biggest issue, for me, comes to play after Generic Male has been brutally devoured (to the point of overkill, tbh), and Hot Girlfriend has to run for her life. To go back to my earlier point of not knowing anything about these characters:

Hot GF isn’t established as someone who can navigate her way out of the woods. She’s a big city lawyer who didn’t want to be off the trail in the first place (I mean, she was shocked to find a dead deer…. In the middle of the woods). And during their argument, she even says this is her first camping trip. So, I find it hard to believe she was able to save herself from a black bear attack. She’d be dead. He’d be dead. Handsome Irish stranger would find their dead bodies and not give a damn.

Also, at the end of the movie, she has her engagement ring? When did she get that?

How Well Does this Movie Play Into Reality?

Because Backcountry is based on a true story, and bear attacks (though rare if you’re smart) do happen in real life, I have to say this movie does play into some real fears. Unlike other “backcountry” type movies that rely on stereotypes of locals, this movie taps into that fear of being unprepared in an unfamiliar situation.

It attempts to do what Jaws did… But with bears and trees instead of sharks and water. I probably would have liked it better if the characters didn’t make stupid decisions to get into their situation. Like, in Jaws, no one made dumb decisions. It was just a freak situation that no one was prepared to handle. There’s no reason why Generic Male couldn’t have a map, or for her to have her cell phone (she wouldn’t even have a signal, as established), or for them to stay on the trail. Wouldn’t it be scarier if they did everything right, but shit still hits the fan?

For once, could there be a scary movie where things still go wrong even though the characters are well rounded, rational humans?

Overall, it’s not an awful movie. It’s a decent horror film to watch if you’re someone who doesn’t like intense horror movies. Not bad, but it doesn’t deserve that 88 percent on Rotten Tomatoes.

Inaugural review over. Better reviews, and horror movies, to come.