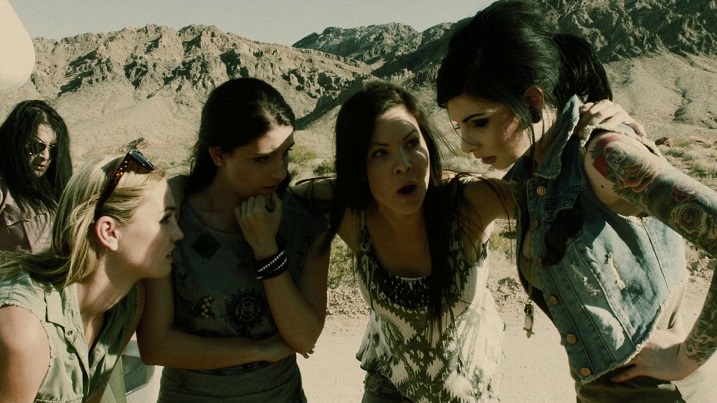 You know when a movie opens with a woman getting raped with a pistol, you’re in for a wild ride. When it comes to a bad horror movie, I don’t start asking questions until, maybe, the middle of the movie. That’s because they’re usually just background noise, and I’m not paying attention until people start dying or Perez Hilton shows up.

But now that I’ve started and manage a website and podcast dedicated to watching the good, the bad, and the ugly on Netflix instant streaming… I need to pay attention to movies. Even flaming dumpsters like Blood Valley: Seed’s Revenge.

But these shitty movies can’t just get away with existing. I have to protect my people.

Okay. That’s a lie. There’s at least a plot synopsis. Dumb bitches who decided to road trip in an RV for a bachelor party get lost in the desert. Shenanigans are sure to take place.

Granted, I haven’t seen the first Blood Valley, and horror movie sequels are never as goo– Oh. Well, this is a horror film, so you don’t need a story as long as the scares are top notch.

But they’re not. I’ve chosen to just lump the categories together into one big heading because this movie doesn’t deserve a full, in-depth review. I would give it one if it felt like the filmmakers cared about what they were making, and if they did, it sure as hell doesn’t show in their final product.

See, when Stormy and I came up with our rubric, we decided that the three basic components to a good horror movie are the story, characters, and production.

Even one of the residents of my apartment agreed when he poked his head in to see what we were recording when we were setting up our “sound studio.”

These are the basic components of any movie, but we felt that ensuring these three work are the only way for a horror movie to work as a whole.

This movie fails on all of those levels. Other than the serial killer (Seed, I guess?) none of the characters stood out, which shows me they were nothing more than objects for the director to strip naked (sometimes for no fucking reason) and dumb mint flavored fake blood on them.

I assume it was mint flavored, that’s what we used in theater.

Now, gorefests aren’t inherently awful. Let’s be real; the first three Saw movies were genuinely good horror movies. But do you know why that is?

The characters had depth. We knew their stories and what they did to get into that situation. Even the OG mastermind behind the whole thing had one of the best backstories a horror villain could ever have: an old man dying of cancer angered how people can waste their lives. We inevitably do care about all of them in some way. They aren’t just objects.

And it helps to have good actors. The director shouldn’t just cast his scream queen on tits alone. Because good performers can try to make the best of a story that’s just terrible. It’s just terrible, and the director has royalties from when Netflix put it on Instant Stream.

I can’t even properly get into the story because I tried to take notes, but I had to give up halfway through. I tried to read the Wikipedia summary, but that didn’t help because there’s shit in that summary I don’t even think happened.
I’m literally screaming into a void because what the fuck was the film crew thinking throughout the process. What the fuck was Marcel Walz thinking while writing the script. I know some reviewers have said this movie is worth a watch because the story is kind of interesting, but that’s a lie, and they’re going to hell for lying. The story is contrived and cliche and just poorly written.

I need to stop because I’m just getting angry.

As for production, I know this was a low-budget movie. But that is not a fucking excuse. I’m sorry, but when Halloween was made for $300,000, budget can’t be an excuse. Today, you can still get a lot accomplished with a small budget because knowing how to write a good story and hold a fucking camera is priceless.

This movie gets a “WTF?”

It’s a good movie if you’re already planning a shitty movie marathon with your friends followed by shots of Kool-Aid.

(I can’t find gifs of this movie, but when I typed “Seed’s Revenge into Giphy, I found this.)