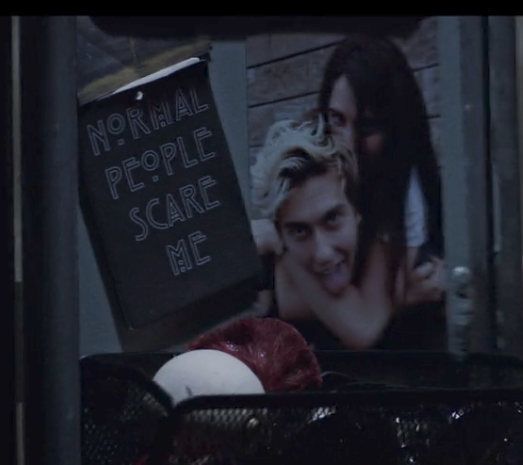 I wasn’t sure if I should write a review for the latest Netflix original movie. Personally, I don’t consider Death Note a part of the horror genre because the movie’s source material is more of a detective story. However, it’s listed under “horror” on Netflix, and the point of this site is to talk about horror movies available for streaming. So, here we go.

I’ll begin by saying I’m a huge fan of Death Note. I’ve watched the series twice, read the manga, and watched the Japanese movies. I may have even written some shitty poems from Light and L’s POVs for my high school creative writing class.
So, it’s hard for me to be objective about this movie. I was always open to it despite the controversy because Death Note–in my opinion–is as close as you can get to a perfect series. So, if you follow the actual story, any adaptation will be pretty good. That’s not the case here.

The story is about a high schooler named Light Turner (Nat Wolff) who spends his days doing other peoples’ math homework and being an outsider. A notebook falls from the sky, and he picks it up.

A few minutes later we see a kid getting bullied and Mia Sutton (Margaret Qualley) trying to stop it. Light comes in to save the day but gets punched out. A teacher finds him with the homework, and he’s the one given detention.

This is where the death god Ryuk, played by Willem Dafoe, enters the picture, enticing Light to use the notebook on the school bully from earlier in the movie. He does, and the kid dies a horrible, gory death that only TV-MA can bring you.

The next day, Mia Sutton, a popular cheerleader who’s also an edgy goth chick, talks to Light for the first time and for some reason she talks to him about the kid who got killed. She also asks about his notebook, and he tells her that it has the power to kill people. Mia gets super wet and wants him to show her how it works.

DISCLAIMER: Telling a girl you have a magical notebook that kills people will not get you laid IRL.

So, together they start killing wrong-doers to begin a new world order. Or some shit like that. Their plan didn’t seem well laid out in the movie. Light decides to refer to himself as Kira, and he gains an online following on Not-Reddit. The rest of the movie shifts its focus to the cat-and-mouse game between L and Light filled with awkward dialogue.

Here’s the thing about adapting this particular anime for an American audience:

You only need to change the location.

The overall pacing of the movie was off. There were several times throughout my viewing where I was just confused by what was happening, and how the characters were coming to their conclusions. Pacing is the key to writing a good story, especially a “horror” story. Pacing is how one creates tension within the plot thread, but the creators of this adaptation didn’t have a clear vision of the story they wanted to tell (no matter what Adam Wingard says). It’s one part high school romance, one part horror, and one part mystery. When those elements are combined without a clear thought, you get a convoluted mess, which is what this movie became.

Death Note isn’t some convoluted anime with all this Japanese lore. It’s about a kid who gains the ability to kill anyone just by writing their name in a book. It’s so simple, but this adaptation made it more complicated by giving the death note three hundred rules–and because there’s so much time dedicated to the death note rather than focusing on Light’s inner struggle of your protagonist.

In my opinion, the place where this movie fails the most is character development–or lack thereof. The writers failed to develop morally complex characters who make the audience question whether or not to root for them. The moral conflict of Death Note lays with its protagonist, and if he isn’t well-written everything else will fall apart around him.

Instead of focusing on the characters and developing their personalities, the writers spent more time talking about the death note. While the death note is important to the story, it shouldn’t be the main focus.

It’s just a tool. You don’t see other thrillers focusing more on the murder weapon than developing their killer.

The killer in Death Note is Light Turner, who has about as much personality as an abusive boyfriend in a Lifetime movie. Compared to his anime counterpart, Light Turner isn’t smart, and he really can’t do anything on his own. Light Yagami decided to test the death note on his own with his ambition to make the world a better place. However, Light Turner is coerced into using the death note by Ryuk who continues to play puppet master throughout the movie. Overall, it’s just hard to believe Light is capable of pulling off some mastermind attempt of becoming a God. And that’s another issue with his character. He chooses to call himself Kira rather than discovering on his own that he’s gaining followers who’ve given him the name. Light Turner is just a douchey smart-ass who has a hard time with the ladies. Like every other male protagonist in a high school drama. Maybe Nat Wolff was a good choice for the role?

L is probably the only one semi close to the anime counterpart, and Lakeith Stanfield did an excellent job playing L when L acted like L. However, when he was working with the other actors, his mannerisms were a little awkward, and they end up lost toward the end. Like a lot of aspects of this movie, they forgot what they were doing, so at about the 40-minute mark he started playing another character. L, the awkward detective broke out of his shell and became Harrison Ford. I don’t have anything bad to say about Lakeith as an actor. He seemed to understand the character and played it the best he could with the material given to him. I would like to see what he could do with this character in a well-written and directed Death Note adaptation.

There’s nothing wrong with him; the issue lays with the direction. L is just rushed. They don’t give him time to be the best detective in the world. They rush his speech. They rush his deductions (I don’t even know how he figured out Light is Kira). And they rushed the initial meeting with Light. (That’s a good way to describe this flick: RUSHED.)

They used Ryuk too much and gave him too much power. It was like the writers couldn’t believe an average human would be able to kill thousands of people unless some outside force was influencing their decisions. Thus, they turned Ryuk into the puppet master whereas his anime counterpart was just watching in the background for shits and giggles. However, the character design looked fantastic, and Willem Dafoe was a great choice for the role. But, since Ryuk was never well-lit and only dwelled in the shadows, causing us never to see his face, I think bringing in Willy D. was a wasted effort. Sure, the performance was your typical Dafoe crazy guy (like Green Goblin with a God complex), but if you’re going to spend the money to bring him in, you should give him more than ten minutes of screen time. In the end, it might have been better just to use the English voice actor for Ryuk. It would have been cheaper and it would have shown the filmmakers cared just a little.

Mia Sutton was unnecessary and the character who changed the most from series to screen. I would describe her as the half-assed attempt to give the movie a “strong female lead.” Whatever the hell that means anymore. For most of the film, Mia is only there to act as Light’s inner conflict. In the anime, you would see Light’s internal struggle in making big decisions, and what his next move should be. Mia is the one who throws out ideas and plans a lot of the time. Then at the end, there’s a half-assed attempt to turn her into the real villain of the movie. (Another good word to describe this movie: HALF-ASSED.)

Overall, the production of Death Note was well done. There were some great cinematography moments throughout, and I could tell that Wingard put thought into some aspects of the movie. I mean, he has a fetish for dutch angles, but I won’t kink shame.

That being said, there were quite a few times throughout the film where it felt like he didn’t know what he wanted this movie to be, and it was these moments that made the movie feel very… awkward and disjointed. The best example of this disjointedness is the final chase scene between L and Light.

Yes. The chase scene between L and Light.

When I was watching this final sequence with my boyfriend, we were both so confused about the tone of this scene because none of it was Death Note. My theory, as I said during my live tweet, is this was meant to be a chase sequence in the Blade Runner reboot, but they realized it sucked. The music, the neon light fetish, the cinematography of this scene would have fit better with an actual crime thriller rather than a horror action movie like this was trying to be.

When Death Note was trying to be a horror movie, it looked great and had a great atmosphere, but it fell apart when those elements tried to come together:

The vision got lost, and the director and writer missed what made Death Note special to all of us who’ve loved the series since it debuted.

Also, they weren’t as clever with their song choices as they thought they were. In fact, the song during the Ferris wheel scene right before Mia died, was laughable. Not dramatic. It was a fucking joke. Like the movie as a whole.

There are those who argue that you have to base your review of an adaptation solely on the adaptation. However, when a filmmaker is adapting or rebooting a franchise as beloved as Death Note, they should do what they can, to be honest to their source material. Death Note is iconic for a reason, and one has to truly understand what makes it so special before trying to replicate it.

Death Note is a 36 episode series and can be broken down into three distinct acts. It’s not a story one can cut down to 90 minutes and expect the same results. Adam Wingard’s Death Note is tone deaf, rushed, and bland. This is an anime adaptation on the same level of Dragonball Evolution and The Last Airbender.

If you’re a fan of the anime and manga, don’t waste your time with this mess.